Another still wanted to call himself Mercury, the inventor of all theft and all deceit, to whom greedy men offer sacrifices, as if he was the god of profit, forming heaps of rocks when passing through crossroads. (De Correctione Rusticorum, 7) 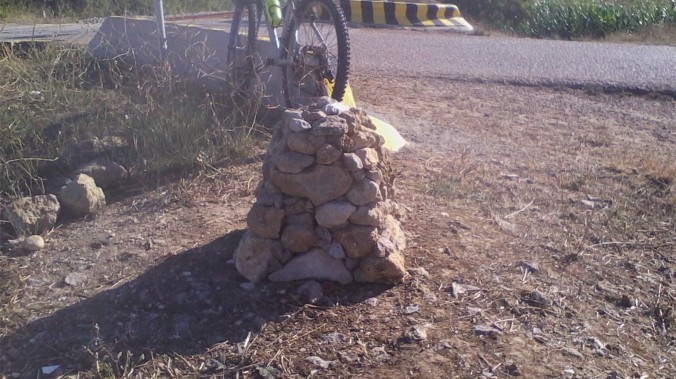 So wrote Saint Martin of Dume in the second half of the 6th century. Of course, he meant it as a condemnation of pre-Christian practices, though how far they were prevalent in northwest Iberia at the time is unclear. But as so often happens, when writing about what you think people shouldn’t do, you end up preserving the memory of it, thus offering the possibility of resumption of those practices later on. Which is exactly the case here: the text gives a clear account of road-side rock piles as a form of tribute to Mercury and so I do just that. As in the photo above, where you can see a cairn I erected yesterday next to a crossroad. Thank you, Saint Martin!

Also, if you’re a heathen and you’ve been paying attention, you may have noticed how his description of Mercury resembles that of Loki in Snorri’s Edda, Gylfaginning 34, where Laufey’s son is called the “originator of deceits” (Faulkes’ translation). Pretty much in line with the character of the Greek Hermes, who’s described in his Homeric hymn as “very crafty” and “thief”, even “Prince of Thieves”, though that didn’t make Him any less godly or unworthy of worship. It did, however, make Him more prone to comparisons with the deceiver-in-chief of the Judeo-Christian tradition – aka, the devil – and you see some of that in Saint Martin’s words. I’m not saying that Hermes and Loki are the same god – it’s not something I believe in – but their resemblances, both in traits and the way they were treated by Christian authors, should be taken into consideration before arguing that Laufey’s son isn’t to be worshipped because He’s a liar.

Like Loading...
Last Sunday, May 1st, was the Dominalia, my annual feast to Freya. After ritually burning the usual offerings to Janus, Juno and my Lares, as is customary on the Calends, I prepared a new fire for the ritus aprinus. Practice makes perfect, so it went better then my first attempts, and I offered the Vanadís small portions of homemade caramel, barley, cinnamon and cherry liquor, plus libations of wine to Her and Her family. I also asked Her to bless a small bowl of flowers mixed with barley, which I took with me in the afternoon and casted on a farm field and a seaside hill top on my way to the beach. And then at some point, my mind produced a question I had not yet considered: is Freya a Lady of Roads or Travellers?

There’s certainly no obvious reference to it in the surviving lore, where She’s presented as a goddess of love and sex, wealth and beauty, seiðr and war. Her connection to the boar, both in stanza 7 of Hyndluljóð and in the name Sýr or Sow, which is listed in Snorri’s Edda (Gylfaginning 35 and Skáldskaparmál 75), points to that triple nature: swines are symbols of fertility, prosperity and, in the case of the boar, of military valour. Which also gives substance to the occasional allusions to Freyr’s warrior side, though that tends to be ignored due to an anachronistic use of the three functions theory, a simplistic equation of friðr with “peace” and a focus on more obvious deities of conflict. Anyway, while there’s no reference to Freya as a goddess of roads and travellers, there are a few hints in the lore that may suggest or, at the very least, give some traditional basis for a modern development of that aspect of Hers.

The clearest clue is Her connection to Odin, whose role as a wanderer is well established. It is said that they share the fallen ones on the battlefield (Grímnismál 14), that She taugh seiðr to the Aesir (Ynglinga saga 4) – thus presumably explaining Odin’s expertise and Loki’s accusation of unmanliness in Lokasenna 24 – and Her husband is said to be an obscure god named Óðr (Gylfaginning 35 and Skáldskaparmál 20), which is the root of the name Odin or Óðinn in Old Norse. And like the One-Eyed Himself, Freya too is said to have wandered through the world, though not in search of knowledge, but Her loved one (Gylfaginning 35). Also, Her falcon cloak is one of the tools used by Loki to travel to Jötunheim, in what is no doubt an allusion to spirit journeys, but journeys nonetheless. It should be pointed out that elsewhere in ancient Europe, gods of roads and travellers were also connecters of worlds, like the psychopompic Hermes or the oracular Apollo. And then there’s Mardöll, one of Freya’s several names listed in Gylfaginning 35 and whose meaning is disputed, though one interpretation is something like “sea light” (marr and dallr), which could be anything from a lighthouse to a star. There are actually modern polytheists who see in Mardöll a goddess who aids or rescues sailors, which is hardly surprising if you consider who Freya’s father is.

Now, again, none of this is an obvious reference to a side of Hers as a goddess of travellers, be it on land or sea. But religion is not static – unless it’s a dead one – so at the very least, there’s enough material to place the possibility and explore it in modern polytheism. On that note, I honestly don’t know if others, heathens or devotees of Freya, have thought about it, but if not, consider this a heads-up. Granted, I may be looking at it from the perspective of a Roman polytheist, which probably explains why I thought of Hermes and Apollo a few lines above. But that too is nothing new in the world of ancient religions, since there was plenty of cultural exchange and reinterpretation between the Latin and Germanic worlds along the Rhine a few thousand years ago. No reason why it shouldn’t be so today and new aspects of the gods shouldn’t be explored.

And no, I’m not thinking about pairing Freya with Mercury as queen and king of byways, if nothing else because I’m already exploring a similar possibility with Ilurbeda. Of course, there is something mercurial to all of this, in that if I’m putting something new on the table, it’s perhaps no surprise that a Mercury devotee noticed Freya’s potential for a goddess of roads and travellers. So at the very least, I may take it up as a task of sorts and yet another case of “liminaling”.

Addendum
There’s another classical parallel that can be made here: in southern Europe, deities of magic can also preside over travellers and roads. Hermes/Mercury again is a clear example, but so is Hecate. And similarly to both of them, Freya too is a psychopomp, even if specifically tied to the battlefield.