Less known and apparently less studied than Bandua, Cosus is a god whose cult seems to have been more common in the Iberian northwest, particularly the coastal areas, and it may have expanded in some way beyond the Pyrenees. As with other deities, his exact nature is unclear, though there are clues and theories.

1. Information
There are at least nineteen altars with the theonym Cosus or variations such as Cossue, Coso and Conso. There’s an additional two containing just epithets – Udunnaeo in one case, Neneoec[o] in another – both attributed to the god in other pieces found nearby, suggesting that they too were dedicated to Cosus and thus raising the number of altars to twenty-one (Olivares Pedreño 2002: 166). Among them there’s also reference to a Consuneae, found in Citânia de Sanfins (Portugal), perhaps indicating that Cosus had a female partner and even though the text isn’t entirely clear (Encarnação 2015: 169-71). And there’s a final altar, once thought to have come from Braga and now believed to be from Aquitaine, in southern France, containing the text Cososo deo Marti (Olivares Pedreño 2002: 157.2-158.1).

There’s thus a small trace of a connection to Mars, adding to another, more hypothetical, that was found in Brandomil, in the Galician region of A Coruña, where one can read Coso M, which has been interpreted by some as Coso M(arti) (Blázquez Martínez 1998: 252). Better attested epithets include Viascanno, Paeteaico, Soaegoe e Oenaego, apart from the Latim Domino, in reference to a function that is not entirely clear, since a domestic role isn’t obvious. 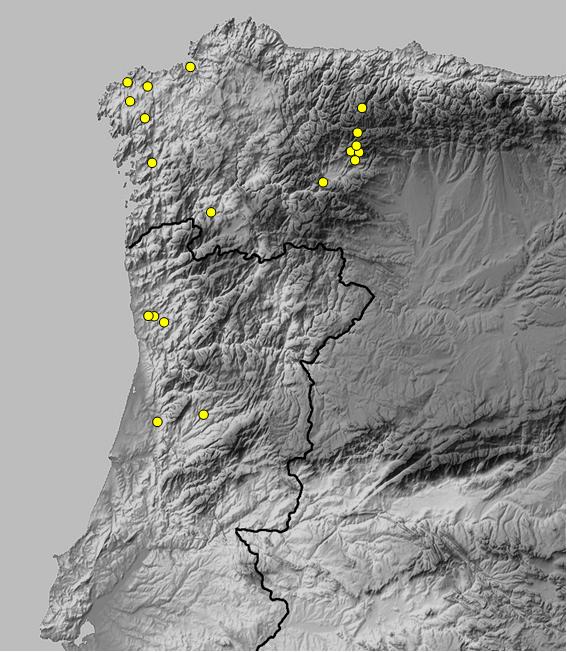 Sites where traces of Cosus’ cult have been found. Map my own.

If one removes the piece believed to be of French origin, the geographic distribution of the altars reveals a clear concentration in the coastal area that spans from the river Douro to northernmost Galicia, though in a discontinued fashion, with two great pockets, one in the Porto region and another in Finisterra. There’s also an extension further south that doesn’t go beyond the Mondego river and an exceptional concentration of pieces inland, in the border area between Galicia and León, where up to nine votive inscriptions were found.

2. Interpretations
The debate on the etymology of Cos- has tilted strongly towards a warrior or aristocratic sense, which was rejected by Prósper, who proposed instead an Indo-European root identical to that of the Roman god Consus, meaning “meeting” or “conjunction”, and a possible connection to the Celtic condate or “confluence of rivers”. Cosus would thus be an aquatic deity, which the Spanish scholar supports further with a watery reading of the epithets (Prósper 2002: 250-1).

If this proposed etymology appears to go against the inscription on the altar of Brandomil, Prósper offers an alternative interpretation of the text Cosus M(arti), suggesting the M stands for M(eobrigo) or M(arcus), the latter supported by Tranoy (Prósper 2002: 250). Olivares Pedreño agrees and favours the possibility that the letter M is an abbreviation of a given name, not a Latin theonym, which was normally written before and not after the name of the indigenous deity (Olivares Pedreño 2002: 67). But even if one wants to accept the reading M(arti), Prósper stresses that Condatis was equated with Mars, as attested by votive inscriptions found in France and Great-Britain (2002: 241) and found precisely near river confluences (Adkins 2000: 143).

However, Olivares Pedreño sees Cosus in a different light, noting not just the altar of possible French origin, but also the lack of overlap between the regions where Consus and Bandua appear to have been worshipped, suggesting they had similar functions and thus wouldn’t be honoured side by side, as that would be redundant (Olivares Pedreño 2002: 158.2). He even proposes that they’re the same with different names and both identical to the indigenous Mars mentioned in classical sources (Olivares Pedreño 2002: 158-9). And it’s also Olivares Pedreño who puts forward an explanation for the exceptional concentration of altars in the border area between Galicia and León, which he attributes mostly to the migration of individuals from the coastal areas to work in inland mines (2007).

3. Work hypothesis
Can one fuse together Prósper’s and Pedreño’s theories? Perhaps, although I should clarify that that wouldn’t necessarily result in a view of Cosus that the ancients would recognize. Yet in order to formulate the basis of a modern cult from scant and fragmented information, one has to consider the historical data and then take it to the next level, integrating and working it in a manner that may lead to entirely new ways of seeing a deity.

In this case, my hypothesis is one where Prósper’s proposed etymology – meeting, confluence – is applied to a military context, making Cosus a god of the army, i.e. the gathering of soldiers. He could thus be identified with Mars, though in a strictly military fashion, entirely focused on the bellic realm and as opposed to the wider apotropaic and communal sense I suggested for Bandua.

4. Ideas for a modern cult
With that in mind, Cosus’ festive dates would be those that have a connection of some sort to military life. Things like the anniversary of great battles or celebrations in honour of fallen soldiers and with corresponding epithets, depending on whether it’s a celebration of a victory, a funeral tribute or the remembrance of a defeat. That would also dictate the exact form of the religious ceremonies, if more infernal or celestial.

Cosus’ animals can be the horse and the raven and his symbols may include the spear and the sword, especially two or more of them crossed so as to convey the notion of meeting. And also following Prósper’s etymological proposal, his places of worship could be located near river confluences, where offerings – biodegradable offerings! – can be deposited.