Everything is full of gods. These words, attributed to Thales of Miletus, express not the notion of an entity that’s everywhere or a pantheistic worldview, but a belief that all things have their deities. Or to put it differently, that nothing is devoid of divine spirits. Plural, not singular! And this is true for the Iberian Peninsula, where human presence goes back several millennia and therefore has a rich set of native or settled deities.

Going through all of them would be too extensive for a blog, but because I wanted to present some of the gods and goddess of the land that is now Portugal, I created a small list and reserved a more detailed look for a few Iberian deities. All in a format that is hopefully accessible and at the same time historically solid, beyond the mere repetition of contents that proliferates online and is often – too often! – characterized by an absence of bibliographic references and an apparent attachment to a single scholar, usually Leite de Vasconcelos, as if nothing else has been written. And also due to that, because a desire for instant information and speedy conclusions are common and prone to generate a poor understanding, I though it wise to add the following points:

1. Present identities are not past ones
There’s a risk of anachronism when speaking of Portuguese or Spanish gods, for the simple reason that Portugal and Spain, as political entities, date from several centuries after Classical and pre-Classical Antiquity. No Lusitanian, Calician or Turduli would have recognized him or herself in Portuguese nationality, because that’s a later construction. And the founding of Portugal, as that of Spain, had nothing inevitable about it, for which reason it is equally anachronic to speak of pre-Roman peoples as a kind of annunciation of what was to come. That is nothing more than a nationalistic fantasy that projects the present onto the past and takes History as a providential process. At best, one may speak of Portuguese and/or Spanish gods in reference to modern borders, though that allows for no more than a form of (re)settleting, a creation of new bounds with the land, including by way of new epithets. It is not a statement about the original or an intrinsic identity of those deities; 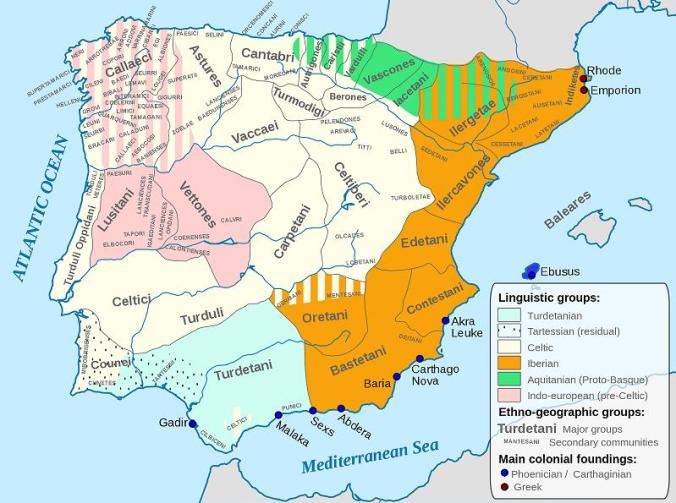 Pre-Roman Iberia, in c. 300 BCE. Map by Alcides Pinto based on the work of Luís Fraga.

2. Overlaps
Precisely because past identities were not today’s, the gods presented here, namely those who are the focus of a closer look, should not be seen as parts of a single and coherent pantheon. Instead, they’re deities of communities and ethnic groups that inhabited what today are portions of modern countries. And that means there are gods whose roles are similar or even identical, which may seem redundant to us, but were not so at the time, because we’re not talking about Portuguese gods – and therefore not of a single pantheon – but of the religious life of various communities and groups, different “countries” if you will, which were located in parts of what is now Portugal;

3. Ritual plurality
Generally speaking, there’s no record of how the old Iberian gods were worshipped. We lack accounts of traditional gestures or prayers and descriptions or even depictions of their symbols or sacred spaces. There’s only a very limited number of archaeological pieces that reveal some of that information and, not without reason, it is assumed that at some point most Iberian deities were the focus of Roman or Romanized cults. The simple fact that the vast majority of native theonyms survive thanks to being carved on classical altars goes to show how much indigenous religious traditions changed under the influence of Rome.

This partly answers the question of how should the Iberian gods be worshipped today. Roman rite is a perfectly suitable option, given that it has a multisecular historical precedent, though there are other equally valid possibilities, like Celtic ritual formulas, to which some of the Iberian deities may have been native. There’s also the option of a mixed solution along the lines of a Gallo-Roman cult and one may also consider a modern ritual praxis, wiccan and neodrudic being two well-known examples. Because the same gods can be worshipped in different ways and, at the end of the day, which tradition to apply is something that ultimately depends on the type of agreement that has been struck between the deity and its worshippers;

4. Starting point, not the end of the matter
What’s written in these dozen or so pages about Iberian gods is not the full scope of the subject. Rather, it is an overview of current and past research, the various theories and hypothesis that have been put forward by different scholars, and my own proposals and ideas for modern cults to old Iberian gods. If you wish to know more, just follow the bibliographic references or do a search online for additional academic pieces. And in doing so, you may end reaching conclusion that are in some or many ways different from mine;

5. Doubt rules supreme
That is so because what little there is is largely a collection of hypothesis and theories. The data is scant, highly fragmented and there’s no known traditions or myths with which to fill in the gaps. At best, there’s a handful of classical accounts by authors who were foreign to pre-Roman Iberia and whose words may therefore be skewed by cultural prejudice. And for many Iberian deities, the name and little else is all we have. Therefore, there’s a huge leeway to formulate theories, not because anything goes – we’re not that deep in the dark! – but because doubt has the final word most of the time;

6. Old roots, new branches
Unsurprisingly, the list of deities in this section doesn’t just share knowledge on old Iberian gods, but also serves as a starting point for those who want to worship them. Of course, doing so today means that you have to go beyond the historical record, not just due to the extensive differences between the modern world and that of two thousand years ago, but also because the information is so scarce that it alone is not enough for a functional religious system. Again, this doesn’t mean that anything goes, since there is an historical starting point that should, at the very least, be taken into consideration. If nothing else because what little there is was produced by people who believed in and worshipped these gods, who nurtured relationships with them, and so to simply cast aside their insight instead of trying to learn from it is almost a form of hubris. The past teaches us things and we would do well to learn if we’re taking things from the past.

So what does it mean to go beyond historical information, but without losing sight of it? It means you should pick an interpretative theory formulated on the basis of known information – as opposed to inventing just because it “feels right” – and from there build a new cult with new elements, but which are not in contradiction with the past. The scarcity of data and the modern context may call for innovation if one is to have living and functional religions, but without simply throwing away the experiences and knowledge of those who came before us. Or to put it differently, one must be like an old tree, its roots buried deep in the past, but its branches stretching out into the sky and in constant growth. If a stump is all there is, because the past is all that matters, there’s nothing but a dead tree; if there’s only branches, because this is now and the past should be left behind, it’s not even a tree;

7. I speak for myself and myself alone
In that sense, and with the exception of the page on the Lares Viales, which are a special case with particular traits, every closer look at individual Iberian gods is structured in a way that makes a clear distinction between the existing information, the theories that have been put forward, my work hypothesis and, based on it, my ideas for a modern cult. Let me stress that: my ideas! I’m not offering dogmas or commandments, just suggestions. And I have no stake in many of them, since I don’t worship most of the gods listed here; not because I have anything against them, but because each person has its preferences and mine include a limited number of Iberian deities. But as a matter of consistency and since my interests are not other people’s, I offer ideas for different cults – even those I don’t practice – delineating the various work hypotheses they’re based on and distinguishing them from the historical information. It’s the most honest and open way to do it and allows for those reading the texts to draw their own conclusions, take it or leave it and, if you so wish, formulate your own hypothesis. If that results in cult and conception variations, so be it. Diversity is natural and it should be accepted as such;

8. Change is a constant part of life
One last thing: the information offered in this section may be updated or changed in case new data comes to light, especially if it changes my perspective. Again, I’m not offering dogmas, just ideas and work hypotheses that are naturally subject to the current conditions.

Having said that, enjoy your reading!
And should you decide to go from words to actions, may you have good experiences with the Gods!